Posted on July 27th, by Emily Rogers (Freeman) in Blog, Featured. No Comments

Devices running the Android O/S made up more than half of all smartphone sales in Australia in Q1 according to Kantar WorldPanel Comtech, who recently released their Q1 2012 figures for global smartphone sales.  Leaping forward since this time last year, Android devices now represent 52% of Australian smartphone sales, compared to 35.3% on Apple’s iOS.

The charts below represent the change between Q1 2011 and Q1 2012.  With virtually no change in iOS market share, it’s devices running the Android operating system which have eaten up market share from Symbian and everyone else in the last 12 months. 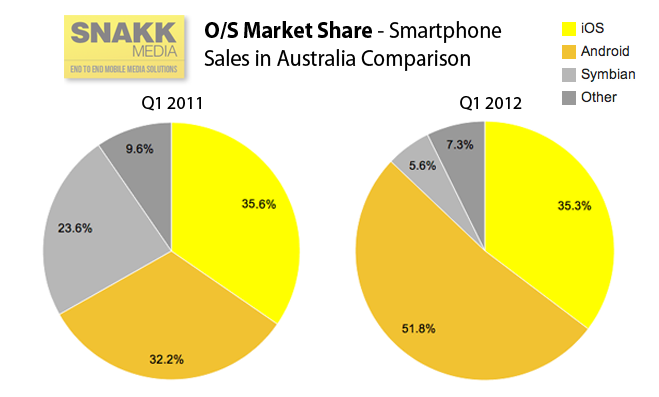 Market share for Apple’s iOS dropped a fraction of a percentage point to hold onto 35.3% of the Australian market, but with smartphone usage increasing overall in Australia, this is far from a reflection on sales, which continue to increase solidly.  The biggest losers are Symbian (Nokia devices) which dropped from 23.6% to only 5.6% and RIM (Blackberry) down from 2.8% to 1%.  Check out Kantar’s WorldPanel Report on Global Smartphone Market Share  for all the figures for Australia and the rest of the world.

Talk to us for your next mobile campaign